What are the forecasts for Brexit at present, from the standpoint of the United Kingdom? What are the potential repercussions on the different tourism sectors?

The latest monthly performances of London's hotel industry suggest good prospects for the coming months. With the decline in the value of the pound sterling, prices are becoming increasingly attractive to European tourists, with an exchange rate that is evolving in their favor. As a result, they continue to flow across the Channel from the Continent and gain purchasing power at the destination.

Patricia Yates, Director strategy and communication at VisitBritain, already foresaw good growth in tourism for the country after the announcement of Brexit in 2016:

Tourism is one of the sectors that could truly benefit from changes caused by Brexit. This is a great opportunity.

Although the separation from the EU, which was supposed to become official last March 29, was postponed, March 2019 saw an increase in tourists arrive at the capital's hotels. London's occupancy rate rose +2.46 percentage points from 84.57% in March 2018 to 86.81% in March 2019.

Another correlation between the political context and tourist arrivals that may be observed is growth in reservations since the departure of Theresa May on June 7, 2019. Hotels reached 89.04% occupancy throughout the month of June, representing growth by +3.45 percentage points, which is the strongest since the beginning of the year.

In reality, these events affected prices the most.The first consequence of these political uncertainties was the decline in the value of the national currency, the pound sterling. This has fluctuated constantly since the Brexit announcement, and continues to fall with each new development, especially since the possibility of a no-deal appears to be emerging. The value of the pound sterling reached its lowest point at the end of July 2019, at €1.09. 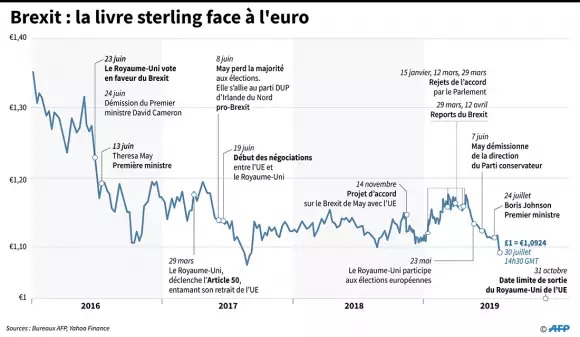 Consequently this first semester 2019 is marked by growth in London's RevPAR by +16.02%. These results point to a good growth dynamic for the British hotel industry in the coming months, in keeping with the development of operators such as IHG, OYO, Aparthotels Adagio and Mama Shelter. Outdoor hospitality is also confident, with some properties even going against Brexit by developing partnerships with European companies, for example the Franco-British between Sunêlia and Best of British begun last May.

Concerns of travel agencies and airlines

In the meantime, tour operators are far from being so enthusiastic.

The direct consequence of the decline in the value of the pound has been a deterioration of the purchasing power of British households. They had no choice but to travel outside the country less often or even to abandon their holidays, as they no longer have the financial resources they previously had. Some forecasts even suggest that the situation could worsen, with flight+travel package prices rising several hundred pounds, if no agreement with the EU is reached.

For this reason, the Association of British Travel Agencies (ABTA) raised its concerns with the British government prior to exiting the European Union next October 31st. The association, which represents the interests of no fewer than 600 tour operators and 2,300 travel agencies, has asked the Prime Minister to ensure that good travel conditions are maintained so that tourism can continue, particularly in terms of tourist visas by making them free, and maintaining intra-European flight routes.

However, the consequences of Brexit can already be felt, even if only on the scale of the oldest British tour operator: Thomas Cook. The tour operator suffered heavy losses in the first half of 2019; these were estimated at £1.474 billion in mid-May 2019, compared with £254 million in the same period in 2018. The economic and political context is a major factor in this downturn, because, as Peter Fankhauser, the company's CEO, explains, "there is now little doubt that the Brexit process has led many UK customers to delay their holiday plans for this summer".

These losses, which were reflected in poor results for the first half of 2018/2019, led the tour operator to welcome a new investor in its capital: the Chinese conglomerate Fosun. The arrival of the latter, which should be concluded next October, would contribute £750 million to the British company's resources, making Fosun the majority shareholder in the tour-operating activity and enabling it to take a minority stake in the operator's airline. However, Thomas Cook has just announced it is seeking an additional £150 million in funding to stave off a winter crunch.

The aviation sector is also being compromised, particularly if there will be a hard Brexit. The airline Ryanair has declared hundreds of jobs will be threatened by the imminent exit from the EU and by the suppression of lines operating the B-737 MAX. The uncertainties surrounding Brexit have caused many potential travelers to renounce travel. The airline will consequently reduce its activities in summer 2020, particularly since its fleet dropped from a total of 58 to 30 airplanes in all.