Austria is a major tourist destination: 29.5 million international arrivals in 2017 for 106 million nights (source: WTO). This has been true for many years: in 2009 Austria represented 4.6% of international arrivals in Europe; nearly 10 years later, this figure practically hasn’t changed and was 4.39% in 2017. So why Austria? What more is there to say about this country that is an old standard of tourism? The answer is simple: plenty. Recently Austria realized impressive results: double-digit growth in RevPAR, soaring occupancy rates, a number of tourists up by 5% in 2017... does Austria have any surprises up its sleeve?

Austria has long been part of the tourist ecumene. The Republic of the Alps has no shortage of attractions of interest: the Salzburg Festival, which has been held in the city of Salzburg since 1920, the Grossglockner, the highest peak in the country, culminating at 3,798 meters, the palaces of the old city of Vienna... The country has no fewer than 10 sites listed as UNESCO World Heritage Sites. So many places, so many landscapes, offering an inexhaustible mine of tourist resources. Austrian culture plays no small role either: this is the country of Mozart, Freud, Klimt... and of course Viennese pastries... The figures alone demonstrate the importance of tourism in Austria: according to Statistik Austria, the national statistical institute, tourism accounted for 8.7% of GDP in 2017, or €32.253 billion. A considerable impact for this country, which has some 9 million inhabitants (8,772,865 in 2017).

Breakdown of accommodations in Austria 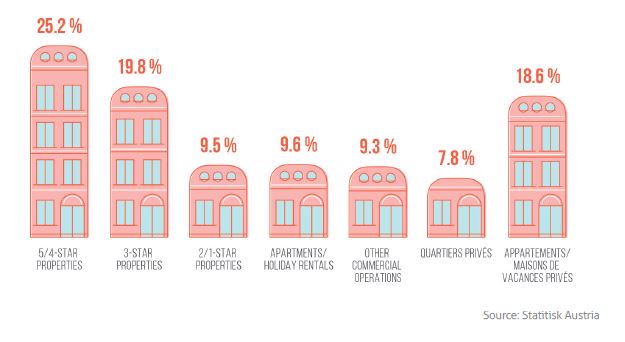 One of the main reasons for this importance in terms of tourism value is the destination’s "luxury" aspect. Here again, the figures speak for themselves: a quarter of the country’s hotels have 4- or 5- star ratings. The national average daily rate, for corporate chains, is €98.20 in 2018 (source: MKG Consulting Observatory / OK_destination): more than the average rate in France, Spain or Portugal, for example. This undoubtedly explains the presence in the country of well-known, very high-end brands. Especially in Vienna: a Ritz Carlton that opened in Vienna in 2013, the Sacher Hotel, with its renowned Sachertorte, is one of the old names in luxury hotels in Europe, and the Imperial Hotel, under Marriott’s Luxury Collection along with the Bristol Hotel. The destination’s image is marked by all that is upscale: Austria is a prestigious country, where the sun shines on the gold leaf of the palaces, from Vienna to Salzburg, and on to Innsbruck. Among the aforementioned hotels: the Ritz Carlton is located in a former palace of the Württemberg Family, the ruling family of a former state of the German Empire, the Sacher is located near the site of Vivaldi’s home... Moreover, the most important events in the country are not open to all: the Vienna Life Ball, a huge charity gala aimed at raising funds for the fight against AIDS, brings together the world’s elite every year, and renowned fashion shows. Or the Salzburg Festival, one of the oldest music festivals in the world, the first edition took place in 1920, it is also one of the most expensive: some well-located places sell for around 400 euros per evening. 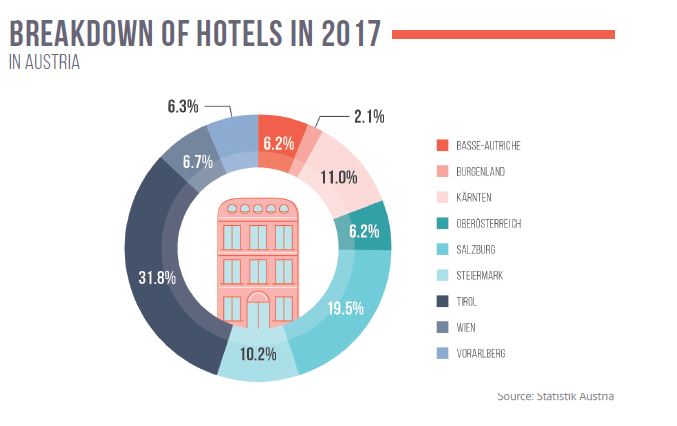 This reputation partly explains Austria’s leading position in business tourism, particularly in Vienna, the capital, which has ranked first in the ICCA’s (International Congress and Convention Association’s) ranking for at least 20 years. In 2009, 2010 and 2011 the city ranked first, ahead of Paris or Singapore, and in 2018 it ranked second with 190 congresses or conventions and 113,891 participants. Such figures can be explained by the quality of Viennese infrastructures: 4,000 hotel rooms in 5-star hotels, 10% of the total park, 16,000 in 4 stars, or 50% of the park. Of the city’s 500 hotels, 100 have facilities to accommodate business tourism such as conference or seminar rooms. Moreover, the city itself has no fewer than 3 convention and congress centres, for a total surface area of more than 70,000 dedicated square metres; the halls host events from the world of medicine: Eurospine, EMUC - the multidisciplinary congress for urological cancer research, ESPE - the annual meeting of endocrinology in pediatrics (3,000 people).

A top-of-the-range destination, with real know-how in the field of MICE tourism, two comparative advantages to which must be added another fact: Austria is a high-performance destination all year round. This is because the country is also a destination for its mountains, winter sports and snow. Half of the country to the west is in the Alps: 40% of the country is located at altitudes of more than 1,000 metres. This results in a successful tourism industry  year-round. This is particularly evident in the geographical distribution of hotels: 31.50% of Austrian hotels are located in the Tyrol region, which is a mountain and resort region. Some have ski areas with more than 200 kilometres of trails, such as the Kitzbühel Ski Area. The whole region welcomes some 3 million tourists in winter, for 6 million overnight stays. Tyrol is the region that accounts for 45% of the country’s overnight stays, and the winter season gained 1 point in ten years to reach 12.5% of all winter nights in Tyrol. All in all, Austria has very high occupancy rates all year round (see graph p 97), winter and summer alike; the average overall length of stay in the country is 4.31 nights, a very high score, driven by stays in resorts that are often longer than others. 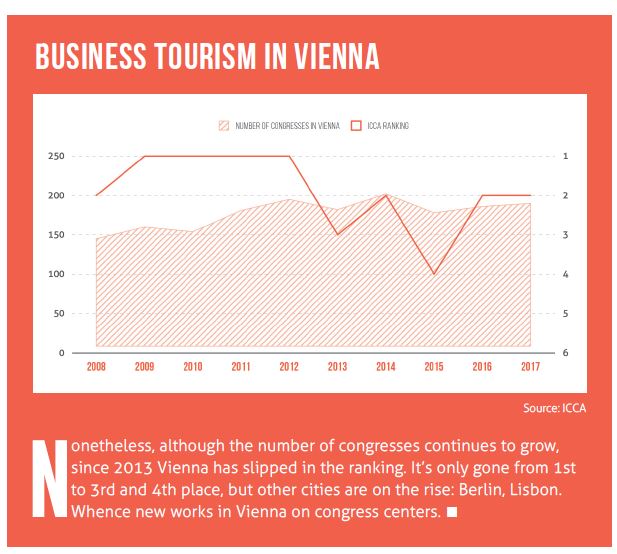 In short: Austria has the typical profile of a tourism leader. Luxury, business travel, famous resorts: the Ice Palace of the travel world. The state as an embodiment of a castle: mountains like high ramparts, hotels like imperial housing. And the international community acknowledges it: Austria co-organized the Euro in 2008, Graz was European Capital of Culture in 2003 before joining UNESCO’s network of creative cities, in 2009 Linz carried the torch of the European Capital of Culture.... Austria thus became a safe haven for tourism and the destination weathered the crisis rather well; all the more so as the number of rooms remains stable, with slower growth than the number of arrivals or overnight stays. This is illustrated in the graph above, with a decrease in the number of players on the supply market, and the disappearance of small low-end and family hotels.

But to suggest that Austria is a solid country from a tourism point of view is nothing new. This model has prevailed for at least 10 years. Even the dates seem long ago: who, besides a soccer fan, knows who won the Euro 2008? Or what happened in Linz in 2009?