As big as Corsica and unknown twenty years ago, the emirate is investing massively to grow its reputation worldwide and become a leading tourist destination in the region. Mirage or future reality? A look at the projects undertaken by the small nation to become a major tourist attraction.

How did Qatar manage to make itself known throughout the world?

Qatar, a nation unknown twenty years ago, had almost 3 million visitors in 2016. Its oil and especially gas reserves have enabled the Emirate to finance the promotion of this 11,586 km² territory. The Al Jazeera television channel, which relays information from the Arab world, initially helped to draw attention to the peninsula. But it is the sponsorship of sports teams and international events that has allowed Qatar to gain renown worldwide and increase outbound awareness.

Raising the emirate's profile is one of the priorities of the sovereign family - the Al Thani - who want to give more weight on the international diplomatic scene to this country located in an unstable region. Pascal Boniface, founder and director of the Institute of International and Strategic Relations, summarizes the situation as follows: "Qatar is a very small, sparsely populated country with complicated relations with Saudi Arabia and Iran, located in a tense geopolitical zone. Qatar believes that the better it is known, the more protected it will be. That its notoriety will ultimately be the best way to ensure its protection, defence and sovereignty.” 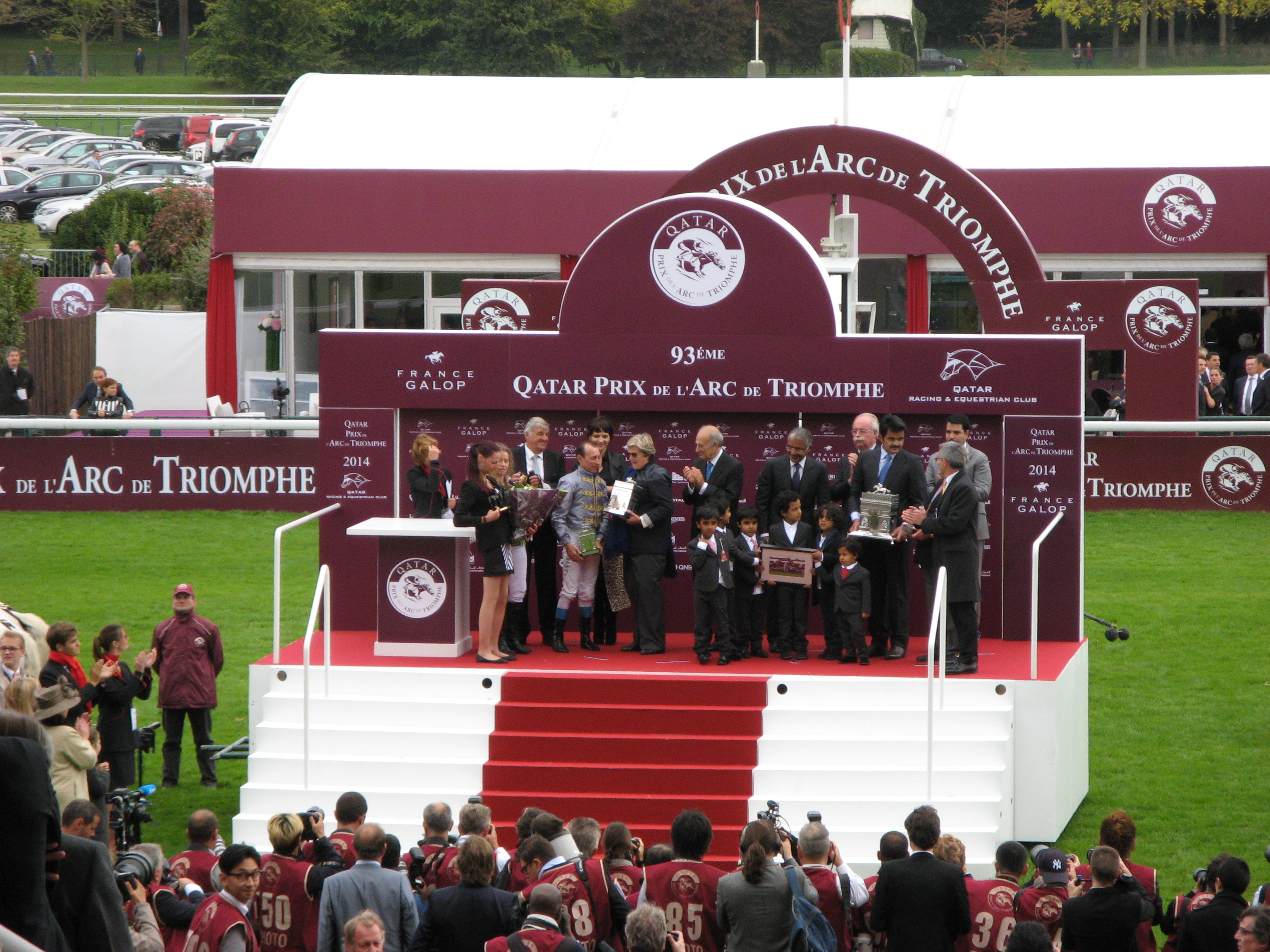 The sport and the positive values it conveys are thus a target for the emirate to increase its notoriety and thus contribute to both the vital interests of the country and to its tourist appeal. The takeover of the Paris Saint-Germain football club in 2011 and the consequent
investments that followed pushed PSG to become the 10th most powerful football brand in the world in 2017 according to Brand Finance. The Emirate also used the popularity of FC Barcelona by sticking the logos of the Qatar Foundation and then Qatar Airways on the 3.6 million jerseys sold during the 2015-2016 season.

Finally, other more elitist sports are also in their sights: the Longchamp horse race, considered one of the most prestigious in equestrian sports, received an unparalleled sponsorship in the discipline to change its name and be called Qatar Prix de l'Arc de Triomphe.  Sheikh Abdullah bin Khalifa al-Thani sums up the interest of this partnership for his emirate as follows: "Tens of thousands of spectators attend the Longchamp races, which are broadcast in nearly 100 countries making them accessible to at least one billion television viewers worldwide. I think Qatar's decision to sponsor this event was a good decision.”

Finally, the last step in this strategy, which aims to make Qatar a key player in the sports industry, is the creation and hosting of events on its own soil.

Launched in 2005, the Oryx Quest Yacht Race was one of the first competitions created by the Emirate, which covered most of the costs and awarded sums unparalleled in the history of the sport with a prize of $1 million for the winner. The use of international sports events as a means of communication had already been clearly stated: "Our objective is to have maximum international media exposure," said Sheikh Hassan al-Thani.
This race demonstrated Qatar's mastery of the organization of sporting events and its ability to host one of the most high-profil competitions in the near future: the 2022 FIFA World Cup.

Mr Al-Mula, Director of Communications of the Emirate, summed up the huge investments made in the sports industry as follows: "This is the fastest way to deliver a message and promote the country. Our leaders want Qatar to have a good reputation.

Which hotel supply to welcome visitors?

This is far behind the economy segment with 2,610 rooms and the budget supply, which represents a very small minority with 250 rooms, or just 1.0% of the market.

The Qatar Tourism Authority plans to develop 75 properties (17,756 rooms) in the coming years, maintaining a strong focus on the upscale segment, which should welcome 48 new hotels (12,729 rooms). 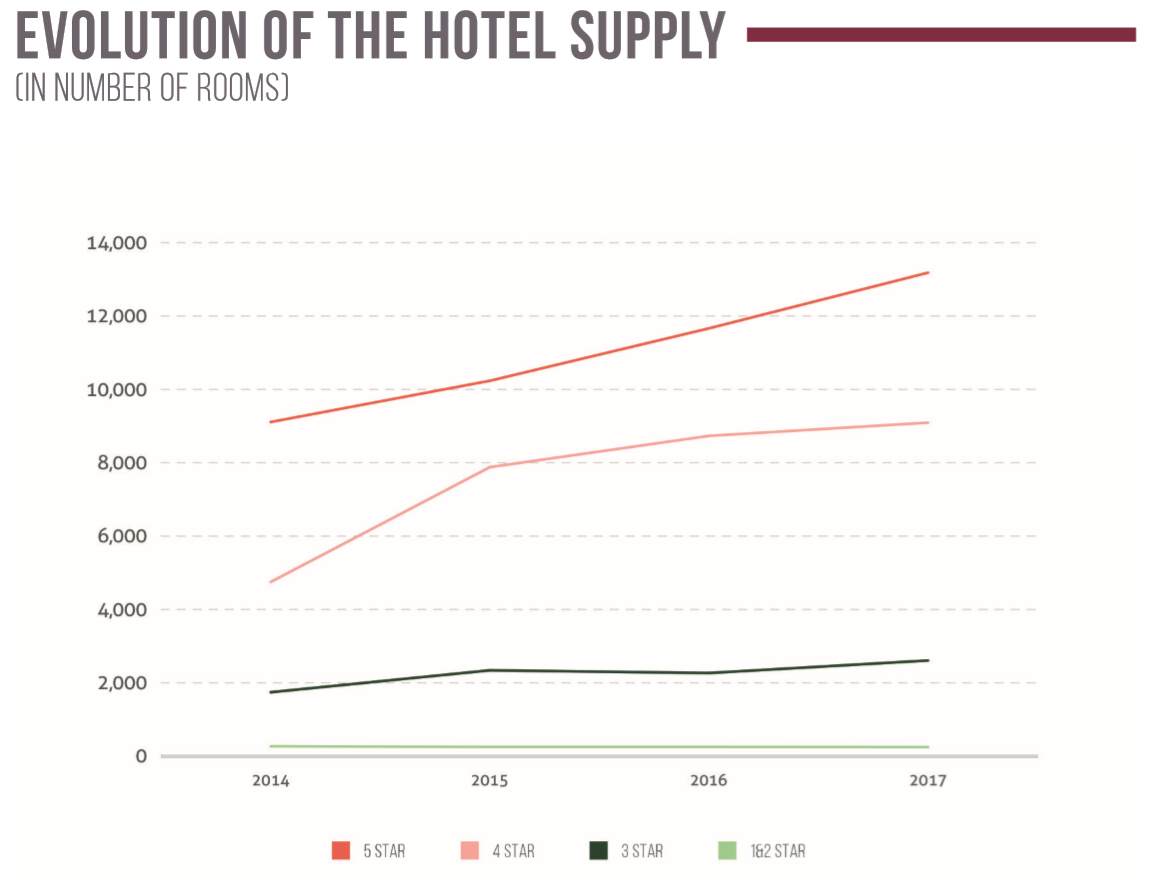 What promotion for the destination?

The Qatar National Tourism Sector Strategy 2030 (QNTSS) aims to promote the country as a "family-friendly and culturally authentic sports and business destination".

On December 2, 2010, Qatar was officially designated as the host country for the 2022 FIFA World Cup. Eight air-conditioned stadiums (six of which are to be built from the ground up) will be operational for the event, including the Khalifa International Stadium (40,000 seats), which had already been renovated to host the Asian Games in 2005, and the Lusail Iconic Stadium (86,250 seats) - currently under construction - which will host the opening ceremony and the final of the Qatar’s first World Cup.

The Emirate's strategy of making sporting events a vehicle for communication will thus be crowned with success with the phenomenal visibility of the FIFA World Cup, whose potential is estimated at 3.2 billion television viewers.

But the biggest challenge for Qatar will be to accommodate the 1 million visitors expected during the four weeks of the competition. After a record 2.9 million international visitors in 2015, the peninsula faces a new challenge in its history. With a hotel supply of 25,167 rooms in 2017, the establishment of temporary accommodation could possibly be under consideration, along the lines of those developed by some hotel groups consisting of rooms in easily deployable containers. Some adaptations of the legislation are also under consideration, such as the temporary authorisation of alcohol consumption

Like Abu Dhabi, which is positioning itself as a cultural destination in the region, the Qatar Museum Authority (QMA) has undertaken numerous works to build new museums, reconfigure the Doha Centre and commission multiple works by Western artists.

But unlike the United Arab Emirates' cultural strategy, which invests in structures affiliated with international museums (Guggenheim and Louvre), Qatar seeks to produce its own cultural identity by fully controlling the functioning of its institutions.  Among the operational establishments is the Museum of Islamic Arts, which aims to be one of the country's leading cultural showcases and which attracted more than 1.5 million visitors (population of Qatar in 2008: 1.4 million) between 2008, the year it opened, and 2012.

The archaeological site of Al Zubarah - inscribed on UNESCO's World Heritage List in 2013 - is regularly highlighted during the country's
promotion because it links the modernity of a growing nation to its history. Similarly, Souq Wakif was renovated in 2006 to provide tourists with an authentic view of Qatar's history

Who are the international visitors?

To welcome foreign tourists, the new Hamad International Airport opened its doors in April 2014 and welcomed more than 37 million passengers in 2016.

To take advantage of this traffic on its territory, Qatar Airways and the Qatar Tourism Authority have issued a special permit to passengers of the airline who have a transit time of more than five hours to allow them to visit the country for 96 hours. On May 1, 2017, the two companies took this a step further with +Qatar to offer these transit passengers a free night in a 4/5 star hotel in Doha. They indicate that during the first month of this marketing campaign, the number of stopovers in Qatar increased by 40%. 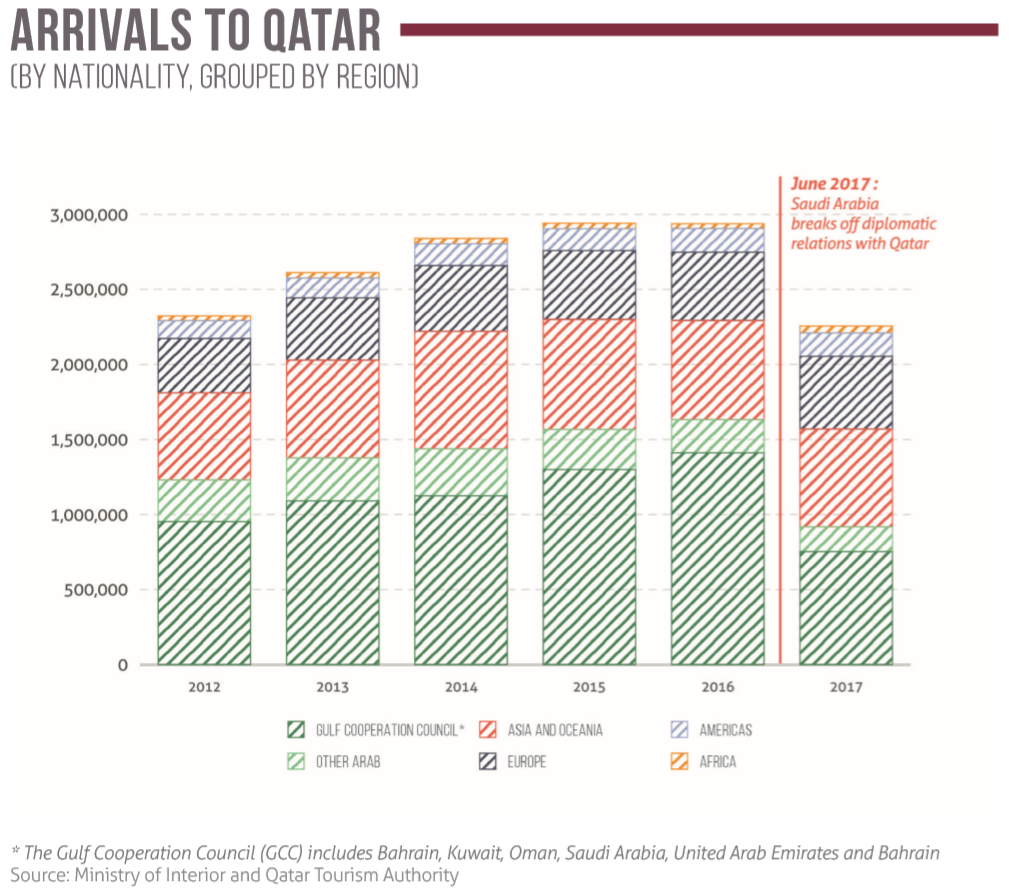 In August 2017, Qatar adopted a more liberal visa policy by exempting citizens of 80 countries from having to have visas to visit the peninsula.

These recent efforts are not insignificant and reflect the diplomatic crisis between Qatar and its neighbours, Saudi Arabia, Bahrain and the United Arab Emirates. The Qatari television station Al Jazeera amplified tensions between these countries by broadcasting information about the 2010 Arab Spring, followed by the withdrawal of their Doha ambassadors in 2014. Finally, in June 2017 Saudi Arabia took a new step by breaking off diplomatic relations with Qatar.

The impact on tourism was considerable: the number of visitors from the Gulf countries * fell by 46.6% between 2016 and 2017, representing a loss of more than 650,000 people in one year. Over the same period, the number of visitors from other Arab countries fell by 25.5% (- 56,576 people). While it hadtaken nearly two decades to attract citizens of neighbouring countries to its territory, with the number of arrivals approaching 3 million visitors in 2015 and 2016, new tensions between Qatar and its neighbours cut off the Emirate's tourist appeal in the region.

Hoteliers were hit hard by this new situation: according to the MKG Consulting / OK_destination observatory, the occupancy rate in 2017 compared to the previous year fell by 4.2 points, and average daily rates fell by 11.5%, which generated a significant drop in RevPAR by 17.3%. 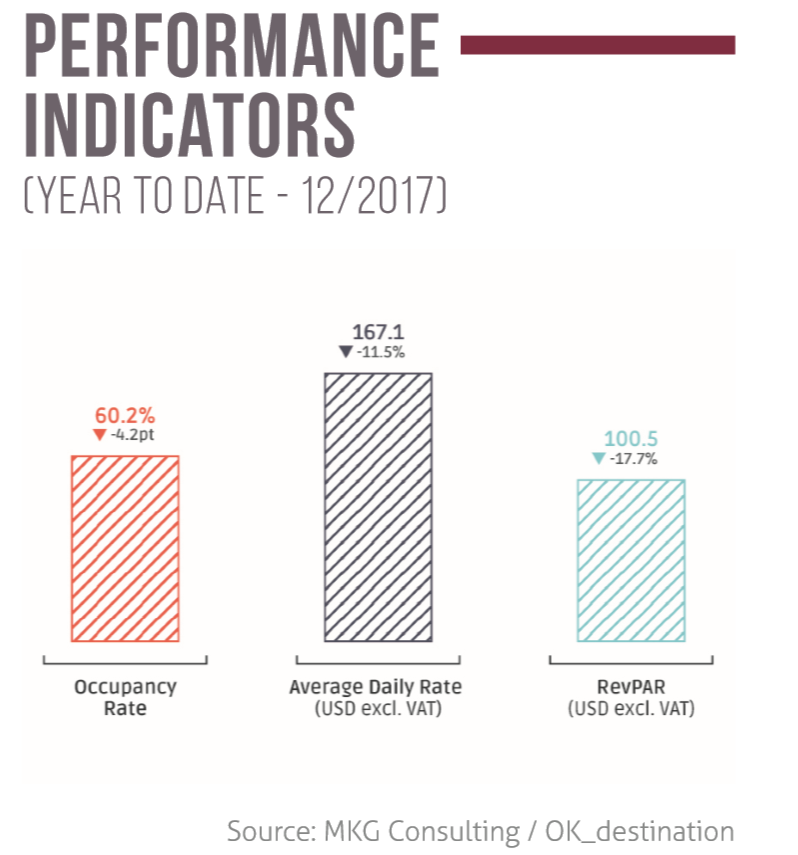 However, the picture is not all bleak and the destination still has a loyal clientele. Europeans are the only market segment to grow over this period, with an increase in the number of international arrivals by 6.3%, representing a 28,758 increase in visitors.

What future for Qatar?

In a context of declining tourist numbers due to a loss of attractiveness to its main customers and an uncertain future with respect to countries in the region, which will freeze the growth of international arrivals in the medium term, Qatar must continue to develop its tourism offer and hotel supply  to meet the challenge of welcoming the million visitors it expects during the World Cup in 2022.

The European customer base, which grew in 2017, certainly represents a significant market share (21.4%) with more than 480,000 visitors in 2017, but it will also be necessary to look to Asia Pacific and its 652,000 visitors to hopefully boost the number of international arrivals. Finally, the slightly declining customer base, in both America (-1.2%) and AsiaOceania (-1.3%), which are the highest spending tourists (USA and China), could constitute interesting qualitative growth drivers for the Emirate.
Other tourist routes are developing to find their way back to a growth track, such as cruises: in September 2018, the Qatar Tourism Authority signed a memorandum of understanding with AIDA and Costa Crociere to establish
special packages and services dedicated to the customers of both companies. Qatar welcomed more than 65,000 cruise passengers last season, a 39% increase compared to the 2016/17 season, with a majority of German and Italian passengers. This growth is supported by the redevelopment project of the Port of Doha where a permanent cruise terminal is being built.
Hassan Al Ibrahim, then Acting President of the QTA, said: "This agreement is another step towards our goal of 200,000 cruise passengers by 2020 and we look forward to working with our Qatari partners to provide unforgettable experiences for every passenger.”
In Qatar, every opportunity is good to position a people that was unknown a few decades ago, and a country that wants to be a leader in the world of tomorrow. Symbol of the wildest and most disproportionate ambitions, the emirate is on a quest for a national motto and may well borrow that of its football team to chart its strategy for the 21st century: Dream bigger

[Update] The sustainable transition of hospitality