For leisure travellers, each of the major urban destinations in Europe has assets linked to its heritage, history and geographic location... But what offers, concepts and positioning with regard to the young target group? What is the dynamism of the nightlife offer? Crossed views on Amsterdam, Barcelona, Berlin, Lisbon, London and Paris.

Six European cities that each evoke multiple images and share, with the exception of Barcelona, positive performance data for the year 2018. Some of them, such as Amsterdam and Barcelona, are victims of their success, which has forced the public authorities to take strong action to regulate tourist clientele. Others have a less "trendy" image. How does each destination work to attract young people, future leisure or MICE consumers to their destinations? 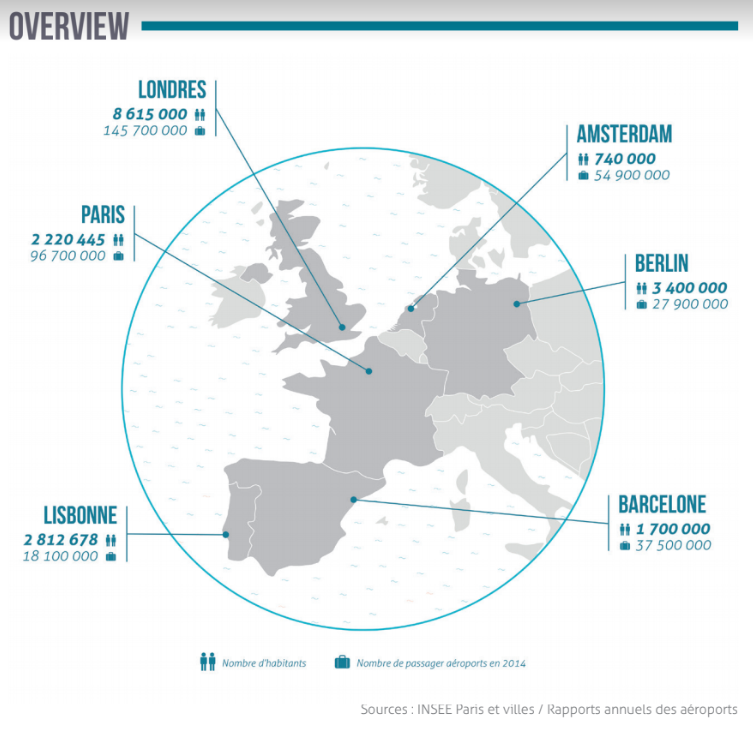 These six European destinations are dynamic cities that each benefit from international renown.

Amsterdam boasts a museum heritage driven by famous artists such as Vincent Van Gogh and Rembrandt, its canals also attract tourists and the world-famous Red Light District, which is a strong vector of appeal for young audiences. It is also a dynamic MICE destination with a RevPAR of €115.60 excluding VAT at the end of 2018, up +5.1% compared to 2017, driven by an increase in average daily rates by +6%, while occupancy rates are down -0.7%. However, after spending 10 years developing the number of visitors, particularly through the "I amsterdam" brand, the city is now falling victim to its own success and its residents are suffering from the damage caused by tourists.

Barcelona, a city nestled on the shores of the Mediterranean, rich in famous architectural heritage and a nightlife that once again attracts young people, is pursuing a drastic policy to limit tourism and give the city back to its residents, who in some cases felt deprived of their city and even chant and write the slogan "tourists, terrorists", which can escalate into nocturnal misdemeanors in particular. As a result, hotel development is no longer possible within the city limits. Despite this, the city ended 2018 with a  -3.4% drop in its RevPAR to 91.7€ excluding VAT, due to a 3% drop in ADR and a slight decrease in occupancy rate by -0.3%. This is the biggest decrease among Spanish agglomerations followed by OlaKala_destination. 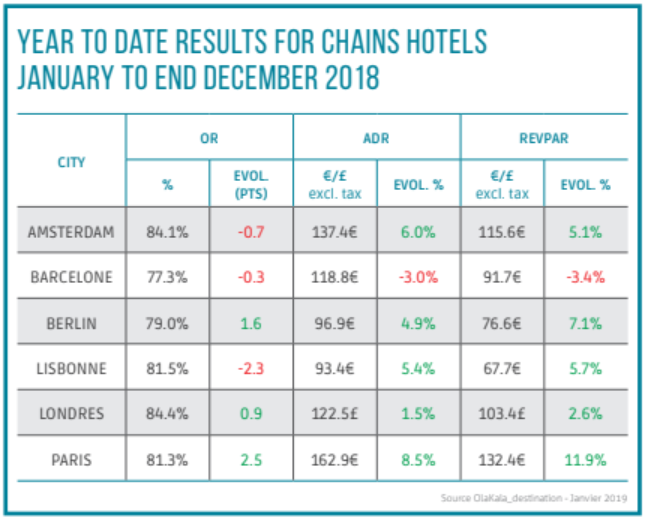 The German capital is home to a flourishing underground culture that also attracts young tourists. It ends the year with a RevPAR up +7.1% to €76.6, boosted by an ADR up +4.9% and an occupancy rate up +1.6 pts.  Real estate prices are increasing at the destination, which suggests a turnaround for the cycle in the coming years. In 2018 it saw its room supply in the chain hotel sector increase by 3.8%.

Lisbon is now one of the popular destinations for short urban stays because of its moderate prices, its climate and its heritage offer. This is not the Portuguese destination that comes to mind for millennials looking for a festive holiday, but rather the coasts of the Algarve in the south of the country, which in some seaside resorts offer a rich nightlife. The Portuguese capital ends the year in the green with a RevPAR up +5.7% to €67.7 excluding tax - the lowest in the panel - driven solely by the increase in average daily rates at a time when occupancy rates are falling by -2.3pts.

The British capital maintained very good performance indicators in 2018 with a RevPAR up +2.6% to £103.4 excluding taxes driven by both ORs and ADRs. In 2017, the RevPAR grew by +5.0%. The impact of Brexit on tourist numbers will have to be determined in 2019, but the capital is performing well and still attracts hotel investors who are fond of its MICE clientele. Ten years ago, it capitalized on the arrival of the Olympic Games in 2012 to develop a new tourist area and revitalize its offer, and the benefits are still there.

Paris has been working since 2015 through its tourist office to develop an attractive nightlife offer. However, the Ile-de-France destination attracts 72% of visitors to visit museums and monuments (source CRT Paris Île-de-France). The French capital continues its recovery and closes the year with a +11.9% increase in RevPAR to €132.40 excluding tax thanks to higher prices and patronage.

Which destinations for which millennial brands?

It is in Berlin and London that the brands targeting generations Y and Z are the best established, Amsterdam and Paris follow with Barcelona and Lisbon close behind. This data should be differentiated by nationality of groups developing them with St Christopher Inn historically established in London and Meininger in Berlin. 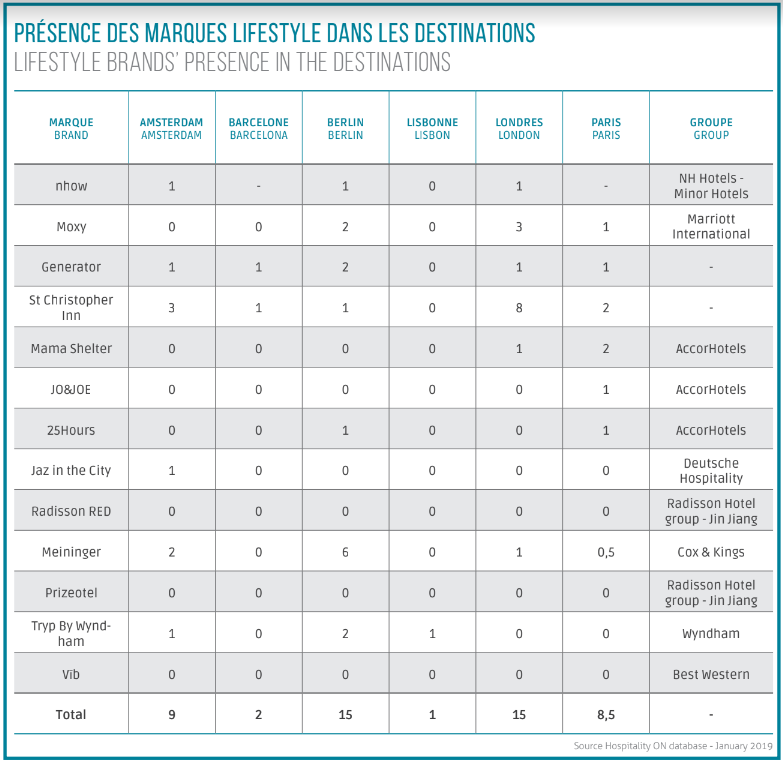 The accommodations supply through the lens of young clientele 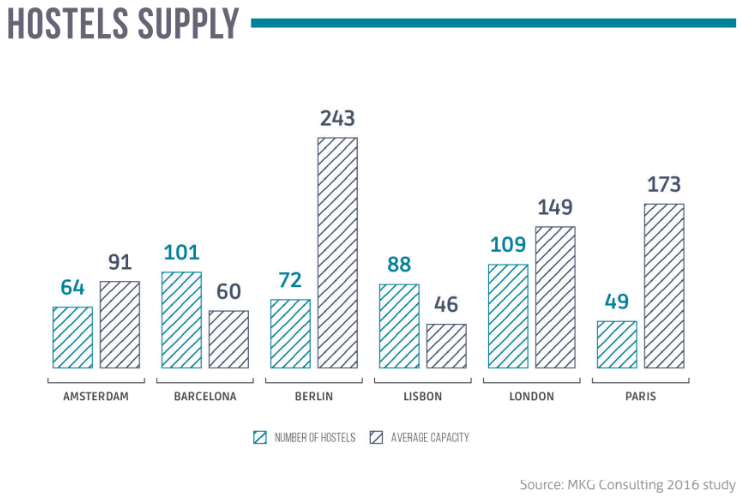 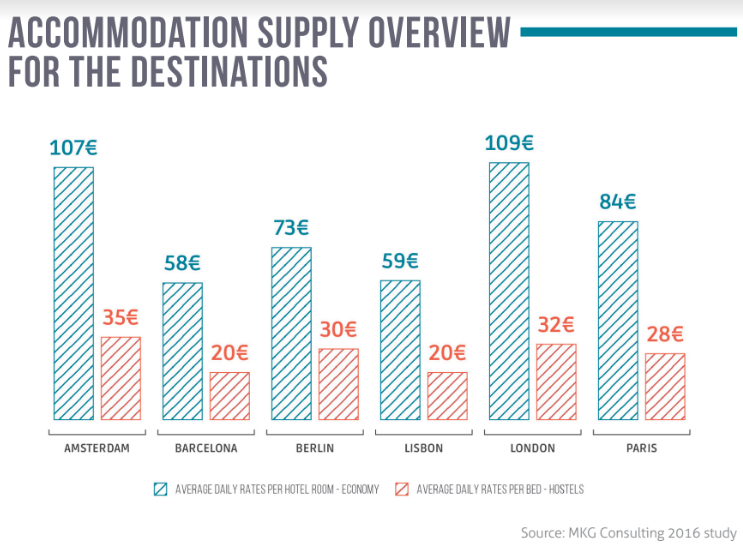 The giant Airbnb is present in all destinations with a record number of rooms and apartments available in Paris and London.  Berlin, Barcelona, Amsterdam and Lisbon lag far behind.

Some of these destinations have taken measures to curb the development of one-to-one rentals via the platform. In Paris, it is impossible to rent an apartment for more than 120 days (with variations depending on whether the accommodation is a primary or secondary residence), and you must request a registration number from City Hall (as a result of the famous "Airbnb decree" signed in 2016 to apply the law for a "Digital Republic"). In Amsterdam, on 1 January 2019 the limit increases to 30 days of rentals per year and per apartment. The Mayor of Barcelona is also developing an arsenal of measures aimed to place strong constraints on homeowners who will no longer be able to rent their homes, for example, if they do not have direct access to the street. 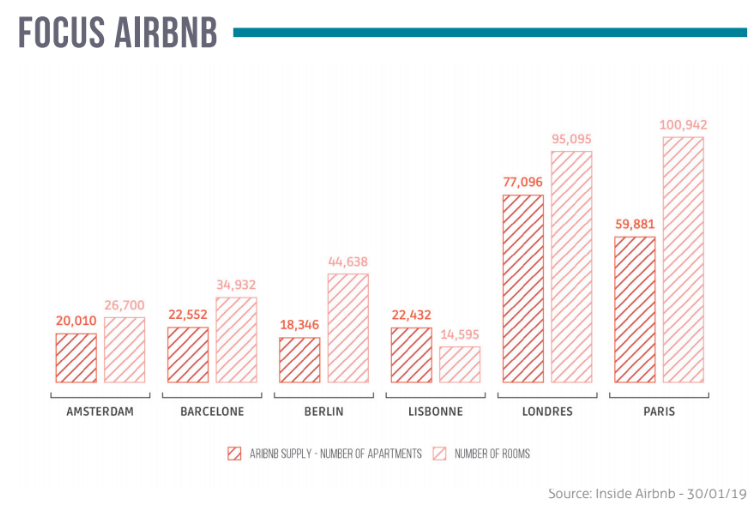 Since the advent of technology and social media, travel is no longer the same. Consumers have the privilege of instant access to information in the form of a digital guide, with TripAdvisor recommendations, blog posts and Instagram photos. Such real time to pertinent recommendations has changed the approach travelers take to their trips.

The biggest websites have understood, and the top tourism sites in each city in the panel keep their own count and hashtags. Nonetheless their popularity varies from one site to the next: 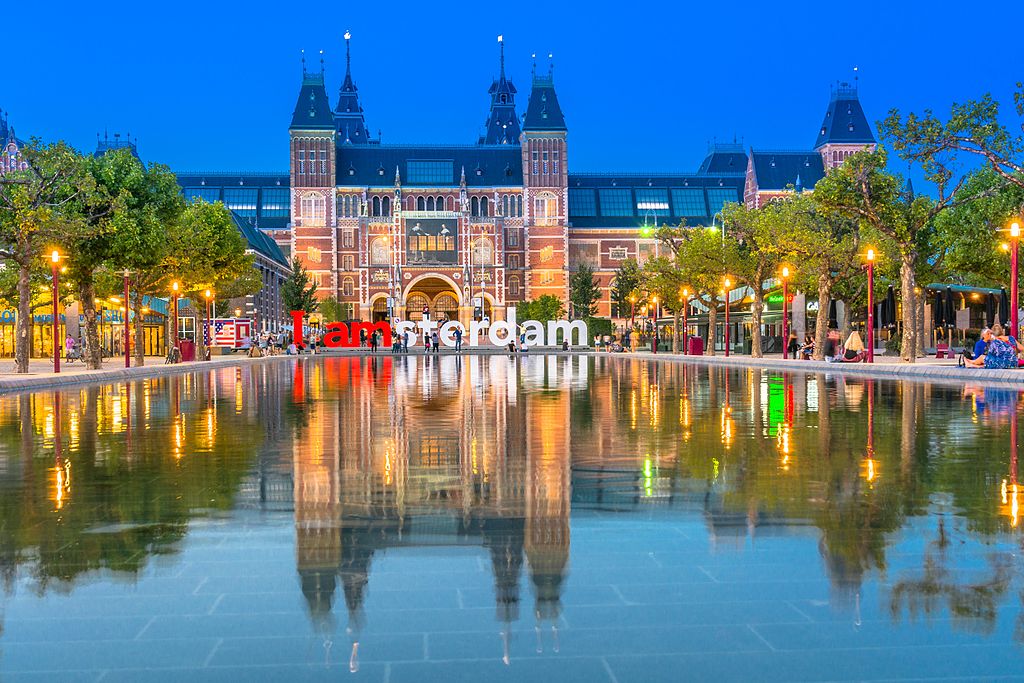 Tourism accounts sell a product that is the destination itself. Therefore:

Millennials are a clientele coveted by hoteliers but sometimes difficult to integrate into destinations. However, they will be the future business travellers and family customers of tomorrow whose purchasing power is likely to increase.