Although the social climate and difficult security situation have driven tourist arrivals down in the region in 2016 with respect to the previous year, Breton hoteliers are holding course. The first months of 2017 attest to a return of clientele. As Brittany’s leading tourist destination, the coastal area is no longer the only place favored by visitors, who are arriving in towns in increasing numbers. Urban tourism is in full expansion, and has been supported by development and planning as well an improved hotel supply befitting business travelers.

A multifaceted territory, with a bountiful cultural and natural heritage, today Brittany constitutes France’s 4th ranking destination, and the leading region for beach resort tourism. Its maritime façade, which covers close to one third of France’s shoreline (2,730 km coast), welcomes millions of visitors each year including many water sports enthusiasts (sailing, sea kayak, scuba diving, surf…). The region on the westernmost peninsula of France also stands out for its wide variety of natural sites – river valleys, moors, peatland, marshes, wooded countryside and forests – that together make up the Breton landscape. The region has many waterways including 600 km that are navigable and propitious to river tourism; while its 12,000 km of marked hiking trails are a hiker’s delight. Between aquariums (Océanopolis in Brest, Aquarium in Saint-Malo, Océarium in Le Croisic…), zoological gardens (Branféré, Pont Scorff, Aligator Bay, Planète Sauvage…), and also gardens and light houses, Brittany has many tourist sites for discovering nature and animals species, which are currently the leading criteria when choosing destinations according to the survey by Reflet du Comité Régional du Tourisme Bretagne (2016). 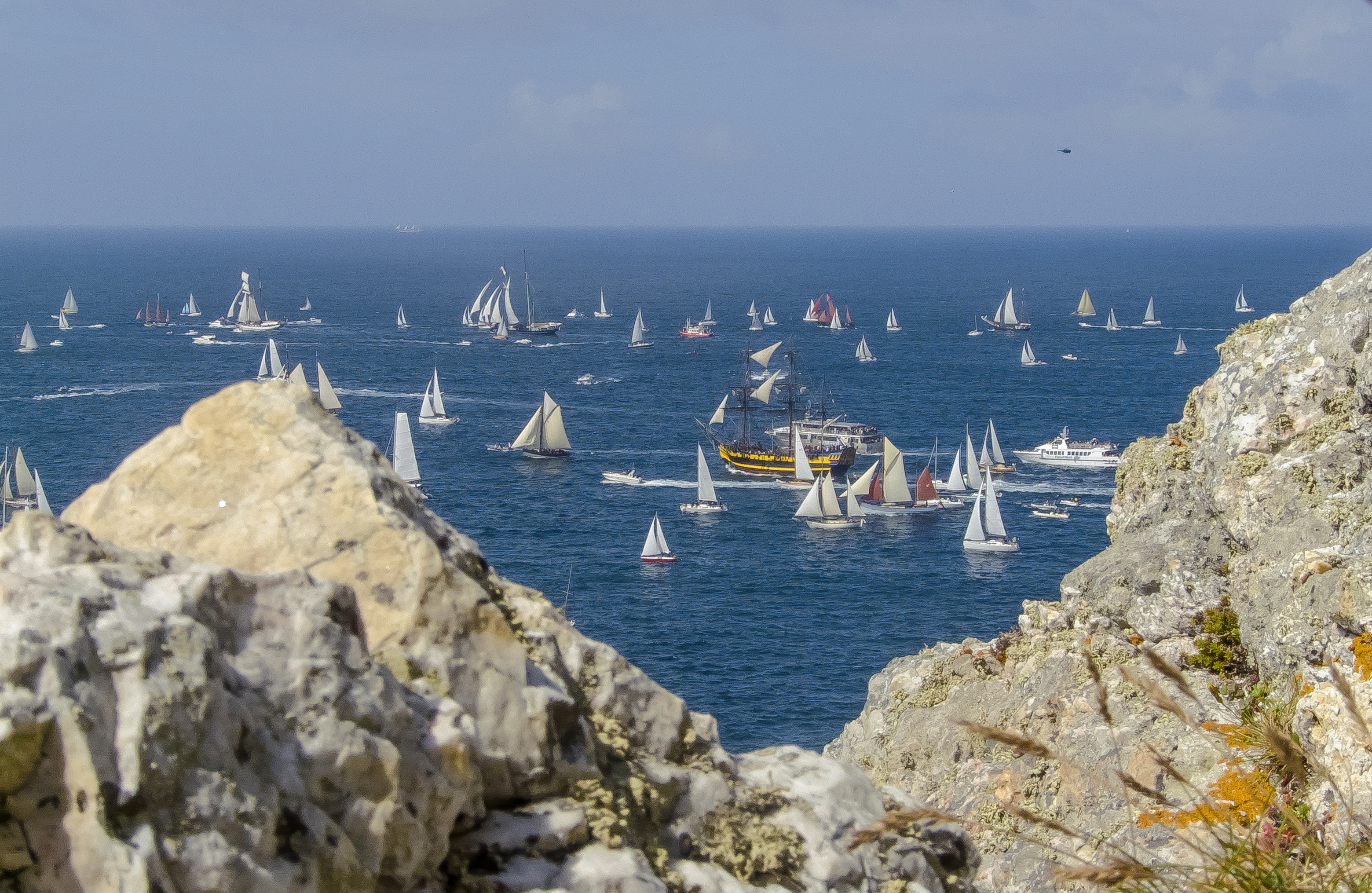 In addition to its natural wealth, the region also has many cultural assets that recount its history.  It is the leading heritage destination in France after the Ile-de-France, with about 3,000 buildings representing a wide variety of structures (religious, military, maritime, archeological…) classified or registered as historic monuments: ancient medieval cities, churches, chapels and monasteries, menhirs and dolmens, castles… Its territory covers sixty or so towns and communities distinguished by the certification labels “Petite Cité de Caractère”, “Villes Historiques”, “Villes d'Art et d'Histoire” and “Communes du patrimoine rural de Bretagne” and whose tourism appeal depends on the quality of tourist entertainment (historic shows, exhibitions, guided tours…). With 161,300 ticketed entries, the medieval castle Le Fort La Latte in Plévenon is the historic site with the highest attendance in the region in 2016, surpassing Château de Suscinio (110,400). The cultural agenda, punctuated by the organization of many events, especially festivals that highlight Breton culture – the Festival Interceltique de Lorient, the Festival de Cornouaille in Quimper and the Temps Fête in Douarnenez – as well as musical events (La Route du Rock, Les Vieilles Charrues, Trans Musicales…) contribute to the destination’s reach.

Brittany is very seasonal (56% of nights in July and August 2016), and primarily attracts families, averaging 39 years old, who prefer the shoreline (76% of all nights). While these essentially consist of French visitors, who represent 83% of nights according to the CRT Bretagne in 2016, foreign clientele (17%) complete the portrait of the Breton tourist, with Britons in the lead (35%), followed by Germans (15%) and Belgians (13%). Due in part to terrorist attacks, which have cast a shadow over France’s international image, this drop in arrivals may also be explained by the unfavorable effects of Brexit: according to figures released by the Comité Régional du Tourisme, travelers from the United Kingdom are down by -10%. Dutch clientele, meanwhile are down -6%, followed by German (-5%) and Spanish (-5%) clientele. The Euro 2016 – which did not encourage the French to travel – as well as protests against the labor code and the project for an airport in Notre Dame des Landes also contributed to the slump in Brittany’s results after three consecutive years of growth: the number of nights grew by +6.5% between 2012 and 2015. To this may be added an unfavorable events calendar and poor weather during the springtime. Considering the context, results should nonetheless be put into perspective, particularly since 2016 succeeded in climbing up to the level of 2014. The trend is more favorable for 2017, marking a return of tourism clientele (CRT Bretagne), despite a summer that offers hoteliers mixed results. 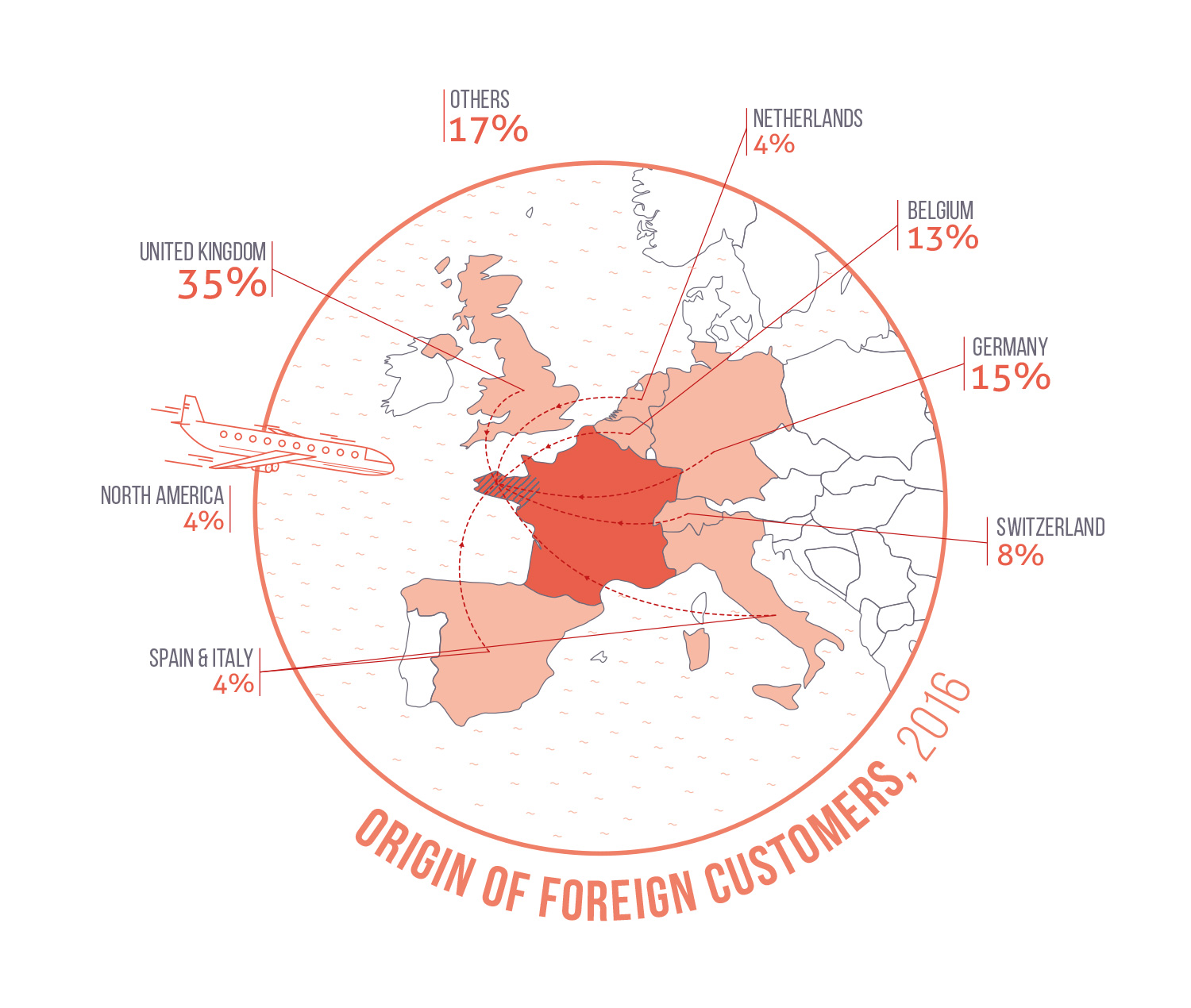 In order to boost arrivals, the region is focusing on the development of new projects, such as “Brittany in my car,” which is dedicated to valorizing the destination’s sustainable image with the offer of short stays designed to facilitate car-free travel. This is particularly dependent on the launch of the high speed line (LGV) Paris-Rennes, which since last July makes the journey possible in less than 1h30, and is part of the “Bretagne Grande Vitesse” (High Speed Brittany) program centering on the LGV and the modernization of the Rennes – Brest and Rennes – Quimper lines.

While the destination’s natural amenities and cultural heritage attract first and foremost leisure tourists during the summer season, today’s business tourism constitutes a new axis for boosting off-season tourism development, particularly in Rennes and Quimper. The ambitions of these Breton cities focus on hosting professionals, through the renovation or creation of convention centers such as Chapeau Rouge (Quimper), inaugurated in January 2017, and the Couvent des Jacobins, scheduled for 2018. Located in the historic center of the city of Rennes in a former 14th-century convent, the latter will have a large capacity and two amphitheaters seating 1,000 and 400. The arrival of the new EuroRennes business district, currently under construction, that will offer more than 300,000 square meters of office space, equipment, accommodations and shops, should also contribute to attracting business clientele from the surrounding region.

More generally, urban tourism constitutes a growth engine for Brittany as a destination that has been dominated by maritime tourism until recently. According to a survey realized by the CRT, urban areas (41%) rank second in terms of most touristic places in the region, after the shoreline (76% of nights). The nine cities of Art and History in the region (Concarneau, Dinan, Dinard, Fougères, Lorient, Quimper, Rennes, Vannes and Vitré) account for 11.5% of tourist nights in the region (source: Morgoat Tourisme). While the core tourism clientele generally prefer other forms of accommodations (rental accommodations, family/friends, camping…) during their stays in Brittany, tourism in the cities tends to benefit the region’s hotel industry: according to Insee, the seven leading cities in Brittany – Brest, Lorient, Quimper, Rennes, St Brieuc, Saint Malo and Vannes – represent 42% of hotel nights in 2016, with Rennes positioned in the lead with a total of 8,074 beds (out of a total of 25,830 in all), followed by Saint-Malo (5,466) and Brest (3,992). The volume of urban nights has increased by +13% on average between 2010 and 2015. The development of cultural spaces, and the proximity of cities to resources for tourism and heritage, particularly the shoreline, all constitute differentiating assets for the region to promote. Close to half of the most touristic sites in the region are less than 25km, or 30 minutes, away from the main urban areas. The wealth and diversity of these cultural events, especially many festivals, also encourage this growth. 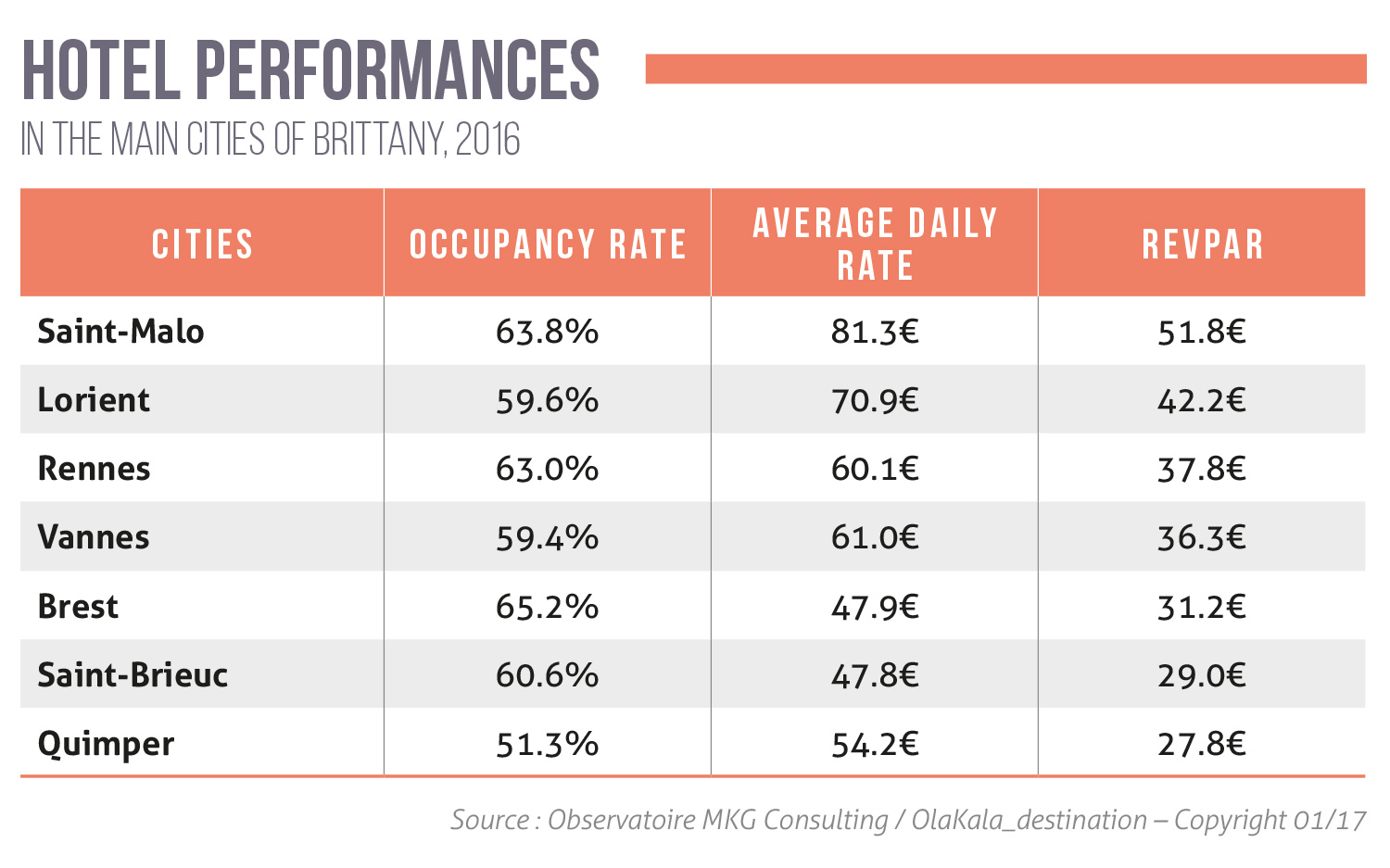 In order to welcome a growing number of visitors, whether for business or pleasure, the hotel supply in Brittany is being modernized and rising in range, as the opening of three new addresses in Rennes in 2016 demonstrates: Le Saint-Antoine, a 4-star, 61-room boutique hotel managed by Best Western Premier Collection; the Magic Hall, a 3-star hotel with 19-rooms based on cinema, theater and dance; and finally the 4-star Océania (70 rooms) located in Saint Grégoire. Another hospitality innovation in the region: a 4-star Golden Tulip was inaugurated in July 2016 in Douarnenez. The reconversion of the entire building of the Hôtel des Monnaies-Hôtel de France in the Breton capital, which will host a 5-star hotel with 115 rooms and suites, has been launched and should be inaugurated in 2019. And in Quimper, an upscale property should also open at the beginning of 2018 in Locmaria: Le Prieuré. The hotel will have 20 rooms including 14 suites. In addition to these openings, the volume of Brittany’s hotel supply has not changed much; it is down 1% in Brittany across the year due to the closing of a number of independent hotels.

At present, the latter has a total of 949 hotel properties, or 54,018 beds. As the third most popular form of commercial tourist accommodations, after rented accommodations and camping, Breton’s hotel industry represents 8% of all tourist nights - 8 million in 2016. With 3,115,200 nights in the year, the midscale segment (41% of nights in all), moreover, draws the most visitors, ahead of the economy and budget segments. This is particularly the case for the chain supply, which accounted for 12,901 rooms in 2016. 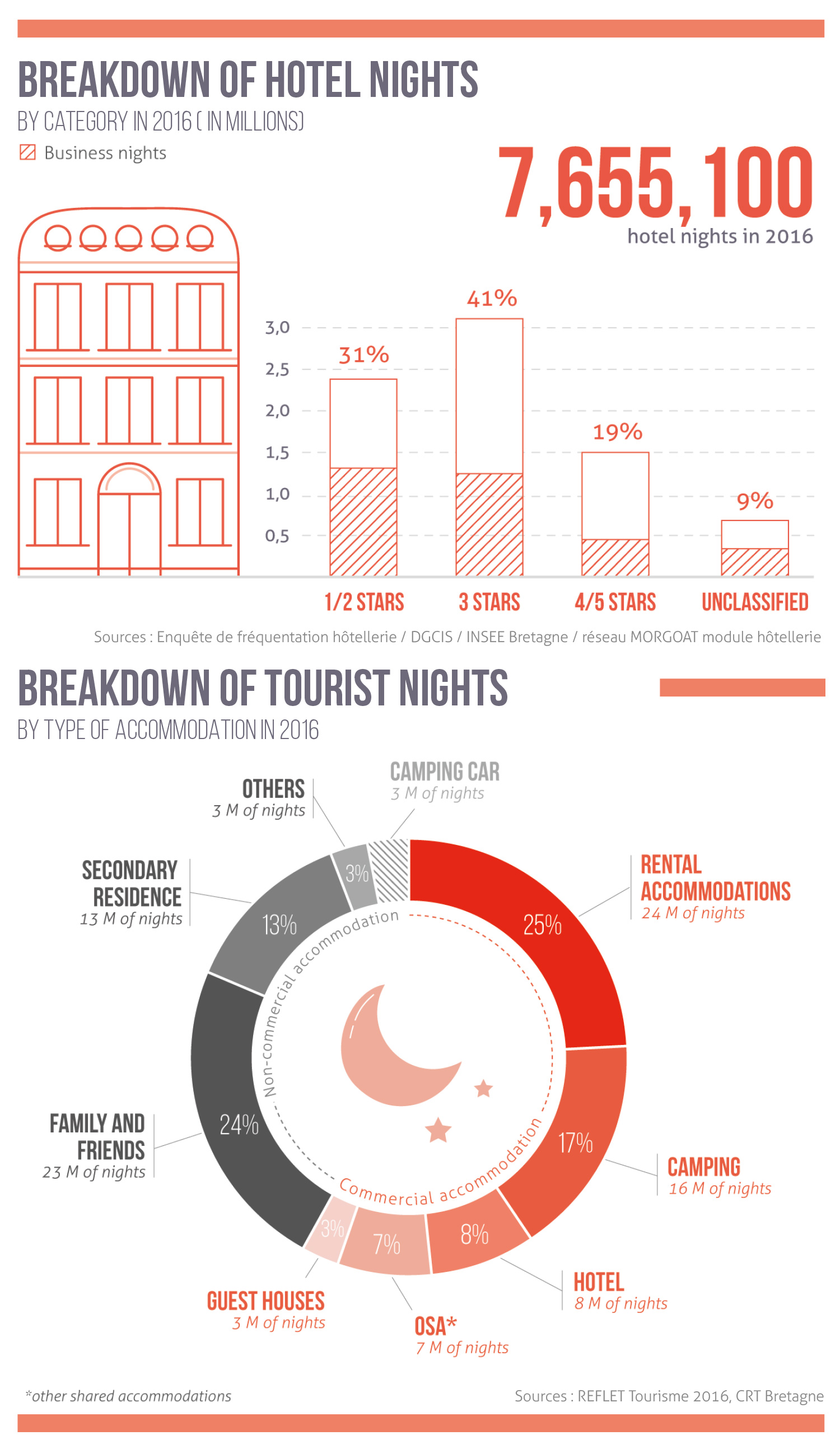 Hotel performances in 2016 are generally positive with respect to the previous year. Despite a drop in tourist arrivals in proportion with the destination, Breton properties post an occupancy rate up by +1.6 points, making it possible, thanks to growth in average daily rates (+2.3%), to post a RevPAR (Revenue per available room) that is up by +5.1%. Moreover, while 2017 posted good results in the spring (+10.9% RevPar for April), the drop in average daily rates during the summer (ADR: -2.9% in July) contributed to weakening revenues for hoteliers: in July the RevPar dropped by -0.4% compared with the previous year. Globally the situation is improving for Brittany’s hotels, which have not yet lost their bearings.