With one exception, with Fairfield Inn & Suites now ranked 28th, the top thirty hotel chains were identical at the end of 2016. Most of them showing stable growth.

The Holiday Inn and Holiday Inn Express brands remain at the top of the ranking with a net increase of 16,329 rooms, an increase largely driven by the Holiday Inn Express brand, which grew by 15,389 rooms over 2017. At IHG, lifestyle brands grew the most strongly with +19.5% for Indigo Hotels, +22.6% for the EVEN Hotels brand focused on wellness and sports, as well as a doubling of the park for the HUALUXE Hotels & Resorts brand created for the group’s development in China. IHG announces a pipeline of 21 locations for this brand with 7 locations currently open. 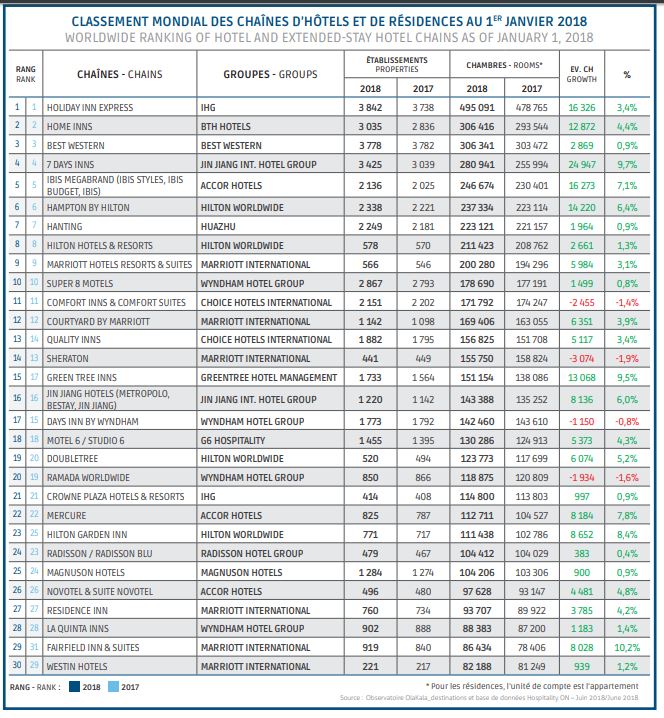 In 3rd place, Best Western timidly resumed growth after a 5.9% decline in the supply in 2016, the brand grew by some 2,869 rooms and achieved almost +1% growth.

HANTING HOTEL of Huazhu maintained its 7th place with a growth clearly slowed compared to 2016 since the brand progressed +0.9% compared to +7.6% in 2016. In 2016, the group joined forces with Accor Hotels to develop the French group’s brands, ibis Megabrand, Mercure, Grand Mercure and Novotel in China.